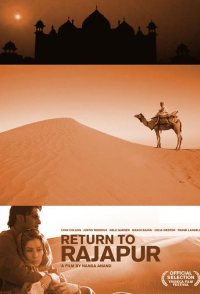 Born and raised by her grandparents in Connecticut, Samantha Hartley (Kelli Garner) travels to Rajasthan, India, where her parents, Sara (Lynn Collins) and Jeremy (Justin Theroux) had their honey-moon during the year 1983. At Rajapur Railway Station she is met by Amar (Bhanu Goswami), who takes her to the Desert Hotel, even though she had planned to stay at Niwas Palace. When she insists, he takes her there, and she meets Vikram Singh Rathore (Yusuf Hussain) and his sullen cousin, Jai Singh (Manoj Bajpai), the owner, who makes it clear that she cannot reside there. She looks around, meets Jai's niece, Shefali (Rita Joshi), and is mistaken for a Grants and Proposal Student, Doyle. She decides to assume this name, is allocated a room, and sets about to investigate why her grandmother not only blamed but also filed a lawsuit against Jai for the death of her son.

The Passion of the Christ
Total votes: 213,127
Average rating: 7.2
Switch to mobile version