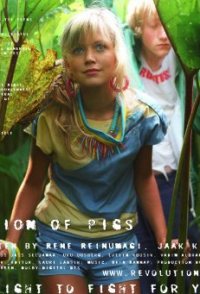 "Revolution of Pigs" is an adventurous youth comedy, taking place in a Woodstock-like milieu. The main character is Tanel, a 16-year-old boy, who, taking part of a youth revolt against the system, finds himself and his love. In summer 1986 five hundred 15- to 18-year-old young people, bursting with energy, have gathered into a camp beside a forest lake. They are looking forward to the coming three days, to the gathering of the Estonian pupils' summer brigades ; three days full of adventures, falling in love and party. But they are living in a totalitarian system and the energy of the youth is pressed into rigid frames of proper behaviour. The shocking sight of hundreds of rotten pigs that have carelessly been thrown into a hole behind the pig shed of the collective farm gives the youth an idea: what if they produce a performance called "Something is Rotten in this Country" in the coming competition in amateur arts. As a result of the performance a scandal follows and Tanel's team is ...