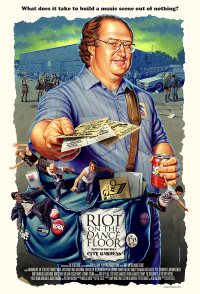 Riot on the Dance Floor: The story of Randy Now and City Gardens is a documentary from director Steve Tozzi, that features the stark and iconic photography of Thrasher Magazine's Ken Salerno. It is told through an oral history format of in-depth interviews and archival footage, bringing to life the gritty story of one of New Jersey's most infamous clubs and its larger than life promoter. City Gardens was a venue for underground music and during its time it traversed the entertainment spectrum; from the comedy of Henny Youngman to Nine Inch Nails, New Order to Nirvana. Riot on the Dance Floor is a journey of musical champions and underdogs and above all, the freedom and liberation of having complete creative control.