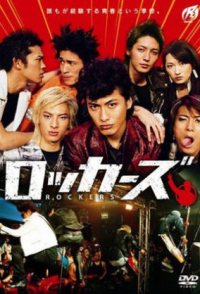 'Rockers' is an inconspicuous provincial rock band which could brag of empty halls and a single fan only. Jin (group soloist) desperately dreamed of a rock star career instead of a carpenter family business. Bassist Gaku-chan so much wanted to fly since childhood that has serious problems with the use of every possible types of psychotropic substances. Momo-chan (drums) have no luck in love, and every new failure only leaves crossed out tattoos on his body. Ko-chan (guitar) is a mess of sexual repression after a childhood at the mercy of two elder sisters eager to use him as a guinea pig for their make-up skills. The band would drag to a bleak existence, until they forced to look for an additional guitar player and crazy talented and charismatic guitarist Tani joins them. Now when the group found its soul and the engine, they intend to fly to the top and reach all their dreams: to become professional musicians and stars, have a lot of fans, women and drugs.