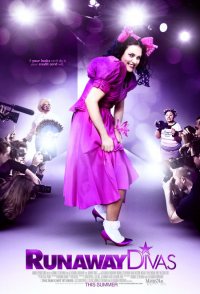 It is the typical working day for Marcy at Runway Divas, the most elite modeling agency in Chicago, where everyone can be a model. A furious stage mom is raising Hell about the high costs of her daughter's modeling career while Cupcake, Marcy's glamorous co-worker, is dressing an overweight construction worker in a glittery thong for his first photo shoot. Vince, the president, is struggling to explain the "one time" modeling fee of $549 to a non-English speaking middle-aged plumber, while Victoria, his emotionally unstable girlfriend, is registering a seventy year old woman for the agency's next lingerie show. It is the typical day until, Miriam, an overly ambitious, mentally challenged woman with a profound talent for playing the accordion, walks through the door. When Vince assigns Marcy the job of turning Miriam into a star, taking the $549 modeling fee becomes more difficult than usual. As he organizes a fashion show designed to drive away the models that paid their fees, ...