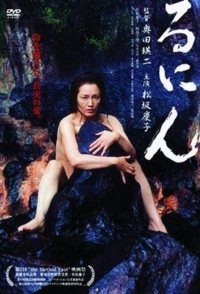 In 1838, on the penal colony of Hachijo Island, the ex-courtesan Toyogiku, convicted of arson in the capital, holds court over a motley assembly of criminals and corrupt officials. There are neither cells nor guards, and the only rule is that everyone is on their own to survive. Toyogiku herself exploits the only currency available for her use: her own sexuality, in give-and-take bargaining reducing life to the absolute essentials - essentials fueled with simmering, unreleased passions. Hatred, desire, love, life and death, the joy and sorrow of being alive: human drama unfolds in the harshest of atmospheres on this solitary island in a distant sea. This marks the 2nd Directorial effort of Eiji Okuda, who won several awards internationally (A total of 8 awards including the 17th Paris Film Festival, Thessaloniki, AFI Film Festival 2002) for his first film 'Shoujyo - an adolescent', a small-town love story set among locals in modern-day Japan. Conversely, 'RUNIN' marks a 180 degree ...