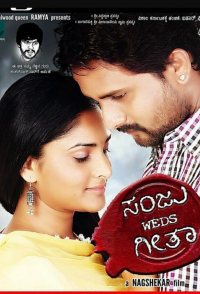 Sanju Weds Geetha begins with Sanju graduating in computer science with top marks, immediately after which he leaves to his native, Kodagu. There he meets Geetha who is seen helping a beggar on the street, and he is instantly infatuated. He pursues her to like him too. After several attempts, the strict and strong-willed Geetha gives into Sanju's good nature and they soon become very close. When Geetha reveals a troubled childhood history to Sanju that involves her being abused by her cousin. Sanju looks past the incident and likes her even more.