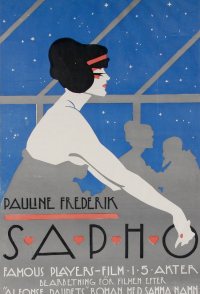 Sapho, whose real name is Fanny Legrand, is the daughter of poor people, her father being a coachman, and her early home is little more than a hovel in the slums of Paris. She is one of the quaint girl flower-sellers on the streets of Paris, earning a few sous daily, which she is compelled to give toward the support of the family. It was while selling her wares in one of the big restaurants that she is first seen by Caoudal, the famous sculptor, who recognizes her wonderful beauty and persuades her to pose for him. The luxury of his studio awakens in her an unsuspected love for the beautiful things of life. One step leads to another, and it is not long before she becomes the most talked of and sought after model of Paris. She is content to live in this way, reveling in beauty and the admiration of her friends and Caoudal himself, until Dejoie, the poet, moved by her beauty, writes verses to her which make both himself and her still more famous, winning her away from Caoudal. The poet ...