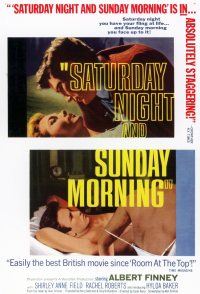 Arthur, one of Britain's angry young men of the 1960s, is a hardworking factory worker who slaves all week at his mindless job for his modest wages. Come Saturday night, he's off to the pub for a loud and rowdy beer session. With him is Brenda, his girlfriend of the moment. Married to a fellow worker, she is nonetheless captivated by his rugged good looks and his devil-may-care attitude. Soon a new love interest Doreen enters and a week later, Brenda announces she's pregnant. She tells Arthur she needs money for an abortion, and Arthur promises to pay for it. By this time, his relationship with Doreen has ripened and Brenda, hearing of it, confronts him. He denies everything, but it's obvious that their affair is all but over.

Directors: Karel ReiszWriters: Alan Sillitoe
Search for articleSearch for trailerSearch for everything