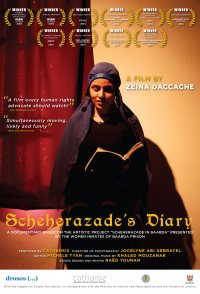 In 2012, after a 10 months drama therapy workshop, the women inmates of a Beirut prison presented their play Scheherazade in Baabda inside prison to the audience. This film follows the women during these 10 months. The women tell their stories showing how difficult it is to be a woman in Lebanon, and in general in the Arab world, which is governed by a patriarchal mentality. They convey the voices of all women who are imprisoned by oppressive mentalities which in many cases lead women to crime.