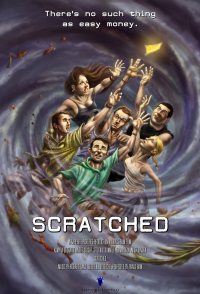 Townsville. Tropical North Queensland. Australia. Present day. University student Patrick has just won a million dollars on a "scratchie" ticket given to him for his birthday. The problem is, it's Saturday, and he can't collect his winning cheque until Monday, so he decides to hide it somewhere inside the house he shares with five other university students: anal retentive "house mother" Jones, obnoxious security guard Lorenzo, laid-back surfer Blake, computer nerd Donald, and meek nursing student Tamsin. Patrick goes out on the town to celebrate his big win, but he drinks far too much alcohol and inadvertently insults a violent thug. Patrick cops a severe thrashing which lands him in Townsville General Hospital in a vegetative state. Back at the share house, Patrick's five housemates discuss Patrick's predicament and his hidden million-dollar scratchie. Figuring that Patrick probably won't live long enough to enjoy the spoils of his newfound fortune, the housemates decide to find his ...