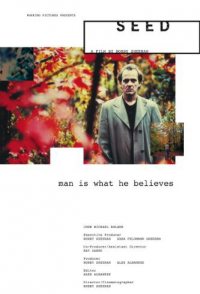 Seed is the story of 40-something Francis Seed who is on a journey to find peace within himself in his last days on earth. We are never told what he is dying of, but we get the sense that it is of his own unhappiness. Mr. Seed's parents are no longer alive; he has no family of his own and he is so focused on his impending death that he's forgotten how to live. Throughout the course of the film, the protagonist meets people whom he looks to for answers and advice. The scattered meetings are edited together like a collage and what unfolds is real life, unscripted stories as told by real people in light of Mr. Seed's fictional dilemma. A junkie who gets clean, a stroke survivor, a liberal rabbi, a band leader named "Dethy," an old black man named Simon and a transvestite who has survived the AIDS epidemic are just some of the characters who color the film. The result is a reaffirmation of life for Mr. Seed, who realizes that it's not too late to start living.