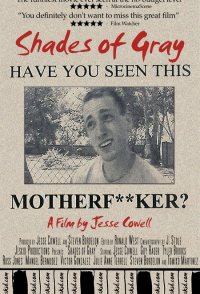 Shades of Gray , a feature film of epic immaturity as five guys get together to blackmail their former best friend for all the horrible, embarrassing and outright disgusting things he's ever done to them. Now it's their turn. Sneaking into his place one night, they swipe Eric's "little black book" containing the names and sexual habits of the countless women he's slept with. Now, Eric has to prove to them that he's truly sorry for everything he's done or the book is going in the mail to his girlfriend, the one woman he might actually love. Each of his buddies sit him down in turn, making him listen to the sometimes cruel, always hilarious ways he's managed to piss them off to the breaking point. Is Eric sorry? Will his friends forgive him? The answers to these in Shades of Gray, a tale of morality and friendship.