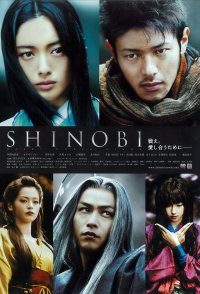 After more than four hundred years of war between the Shinobi warriors of the Manjidani Koga and Tsubagakure Iga clans, the Lord Hattori Hanzou decrees that they must live in peace. Both clans live hidden in the woods and mountain without confrontation and without training ninjas in the shadow art of Shinobi. In 1614, the Lord of the Lords is convinced that the clans are dangerous threats for keeping peace in his lands, and his advisor plots a Machiavellian plan to destroy their best warriors in a contest. Meanwhile, the young Iga Oboro and Koga Gennesuke fall in love for each other. When Oboro's grandmother and leader of Iga clan Ogen and Gennesuke's father and leader of the Koga clan Danjo kill each other, Oboro and Gannesuke must lead their warriors in the ultimate battle of the Shinobi clans.