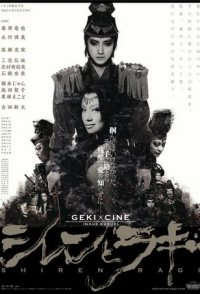 Two souls were drawn to each other without any possible escape from their doomed fates. It was in an era when the country was divided in the north and the south. A legendary woman "Shiren"(Hiromi NAGASAKU) who was born to a family of assassins. A young sword fighter "Ragi"(Tatsuya FUJIWARA) who looked up to Shiren with admiration. News was brought to the north that said the King of the South "Godai"(Katsumi TAKAHASHI) has revived who once was assassinated by Shiren. Shiren was once again ordered by "kyougoku"(Arata FURUTA), a high-ranking vassal of the North, to assassinate Godai. Shiren was upset about Godai being still alive whom she believed she had killed. Ragi who sensed Shiren's distress volunteered to accompany her on the mission. Shiren's cold heart started to melt by seeing Ragi's determination to be there for and support her. Finally the moment to attack Godai comes. It was the moment when an astonishing truth was revealed to the two who had shared their love by that time.