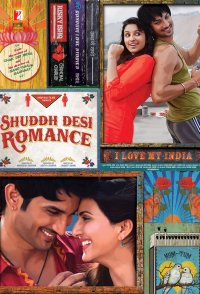 Shuddh Desi Romance is the journey of three restless young people who junk the society's syllabus for finding love and decide to follow their heart. Raghu (Sushant Singh Rajput), a tourist guide in Jaipur, wants a love in his life, and that's it. The rest he's going to figure out along the way. Gayatri (Parineeti Chopra), a part-time instructor in an English speaking institute, has been around the block a few times and knows the scene, warts and all. Tara (Vaani Kapoor), who's dying to get out there and fly, knows what's right for her, but a little experimenting never hurt anybody, did it? When their lives crisscross, their beliefs get challenged, and their loves, tested. We all want it all...the love, the attraction, the relationship, the commitment. But when we get it, it may not be in the way we recognise.