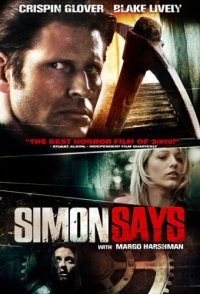 The pothead Zack; the sweethearts Kate and Riff; the slut Vicky; and the spoiled Ashley travel by van to the backwoods to camp. They meet two strange gravediggers that advise them to leave the place otherwise they could be murdered. Then they meet the deranged retarded Simon in the gas station and Riff has a friction with the guy. They find a paradisiac spot to camp at the riverside, but Simon and Stanley transform their holiday in a nightmarish night.