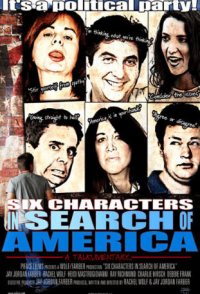 Set against the backdrop of a summer barbecue, "Six Characters in Search of America" serves up spirited, unscripted discussions on every imaginable topic of significance to middle America and to the global population. Underscored by poignant quotes from political leaders, philosophers, actors, and other revered public figures, this daring debut spans the course of a weekend while addressing some of the most important questions of our time. On the grill are not only the issues at the forefront of every political election, but also the controversial hot topics and real, everyday concerns that have been on the back burner for way too long. They are neither Senators nor members of Congress. You won't see them on a political panel swapping rhetoric. They're real people getting real about what¡¦s happening in our country and how it will affect our future. Appropriately, SCISOA opens on a conversation about freedom of speech and the liberties upon which our country was built. It's all on the...