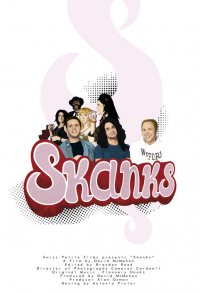 In religion and football-obsessed Alabama, a group of actors bond while producing an original drag musical. In the winter of 2012 a community theatre in Birmingham, Alabama mounted an original musical, 'Skanks in a One Horse Town.' 'Skanks' follows the actors and creators from rehearsal through performance and after, at work, at their homes, and with their families. The cast of amateur performers bond to form a family of sorts while creating the unconventional show in a conservative Southern city.