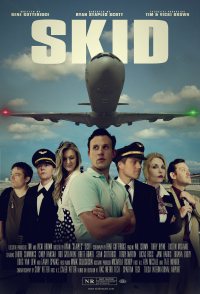 Blissfully unaware that Atlantica Flight 1945 from Atlanta to Amsterdam is about to make aviation history, First Officer Danny McSweeney focuses his energies on navigating the turbulent personalities of an eccentric female captain, a co-pilot with a talent for tactless comments and conspiracy theories, and a lead flight attendant with an out-sized attitude that definitely exceeds the limits for carry-on baggage. On the other side of the cockpit door, the unscheduled in-flight entertainment includes a potbellied pig, a jittery diamond courier, and the recently jilted Lucy Meredith, whose personal mantra of "What Would Oprah Do?" will be challenged by the sudden appearance of her ex and his new traveling partner. On her left sits Hank Hazard, whose unusually polite but constant requests-prompted by his covert role as a spy for the airline-test the limits of the crew's customer service. But as Lucy and the rest of the crew discover, Hank's odd behavior is linked to a quiet faith that may...