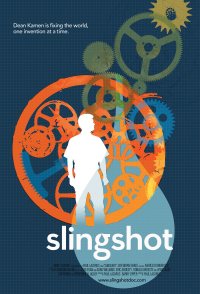 SlingShot focuses on noted Segway inventor Dean Kamen and his work to solve the world's water crisis. An eccentric genius with a provocative world view, Kamen is an inspiration for future scientists. His inventions help people in need and ease suffering. SlingShot is about an indomitable man who just might have enough passion and innovative thinking to create a solution for a crisis affecting billions. Kamen lives in a house with secret passages, a closet full of denim and a helicopter garage. His latest passion: the SlingShot water purification system created to obliterate half of human illness on the planet. Kamen reminisces about improving home dialysis technology and choosing to forgo parenthood while lamenting he has only one lifetime for inventing. SlingShot is both an inspirational character study and a look at Kamen's vapor compression distiller from its earliest development through recent trials in rural Ghana and beyond.