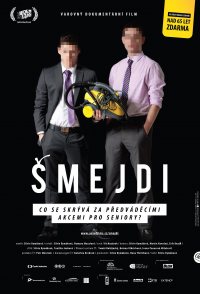 Silvie Dymáková's raw documentary uncovers the manipulation, humiliation and pressure that exist behind the closed doors of "product demonstration excursions for seniors" in the Czech Republic. The sad heroes of her film show us the non-functional saucepans, unused vacuum cleaners, "wool" blankets and bio-lamps they bought during such excursions for tens or even hundreds of thousands of crowns... and that is the best-case scenario. In exchange for their ID cards, confiscated by sellers, many have signed loan contracts. Despite their shocking experiences, the elderly repeatedly take part in these events in a bid to escape their loneliness or because they can't say no to the offers. Dymáková succeeded in smuggling a hidden camera into product presentations and, with a psychologist and a lawyer, analyzed the high-pressure methods employed. Even while being completed, her documentary sparked a deserved uproar when it became clear that dozens of Czech firms were abusing seniors' ...