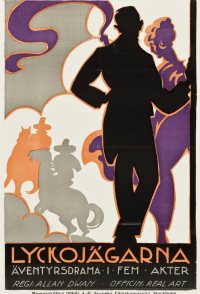 Civil engineer Robert Clay ( Norman Kerry ) is commissioned by wealthy New Yorker Mr. Langham to open iron deposits in the tiny South American republic of Olancho. General Mendoza ( Wallace Beery ), the unscrupulous head of the army, unsuccessfully tries to persuade President Alvarez, and then Clay, to divide the spoils of the contract. Mendoza begins a revolution against Alvarez, but Clay and his men set out to stop the plan. Meanwhile, Mr. Langham arrives with his two enchanting daughters, Alice ( Anna Q. Nilsson ) and Hope ( Pauline Starke ), on board a yacht owned by Reginald King, Alice's suitor. Clay's long-lived attraction for Alice has been met with coldness, but Hope wins his heart by shooting down some of Mendoza's men when they try to kill him. After a savage battle, and the arrival of a U.S. battleship with sailors, Mendoza is finally beaten.