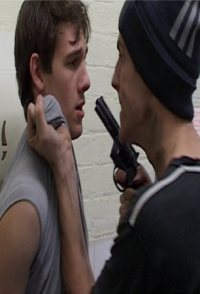 Thomas (15) and Vincent (13) are two brothers. One day they decide to run away from a broken home. They land on a small island off the South Coast of England to escape their current reality. On the island they discover a huge, derelict and abandoned warehouse and they are on their way to explore it with only a lighter. G1 is a small time crook, who lives inside a washroom in the abandoned warehouse. G1 believes that he has a girlfriend and dreams of her. Jenia is a young girl, 22, mean and vulgar. She has spent most of her life inside a housing estate. G1 works occasionally, he hops on the ferry to the mainland to steal from people. G1 is in his thirties and he has a severe drug problem. He has a mate, Kid or G2, a small time crook who pops in on various occasions. Like Thomas he is also obsessed by one book entitled "Speed of Light". When he is not a small time crook, he reads it all the time. Unlike G1 he hasn't got a drug problem. G1 often dreams about his girlfriend and some of ...