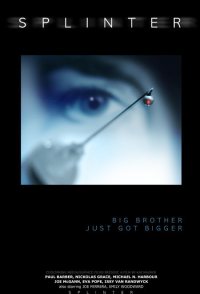 At Treccabyte Tower, five people are working at the weekend: The CEO Mr Floss; his head of legal affairs Mrs Peters; her assistant Joyce; the security guard Dan and the janitor Ramon. Five people who barely know each other, though they see each other every day. Mr Floss is bored but has just split up with his girlfriend and has nowhere to go. The recently-divorced Mrs Peters is frustrated that she never sees her daughter while she's awake, and someone seems to have stolen her favourite mug. Joyce is terrified of her boss, and can't seem to get her psychiatrist Dr Lexington on the phone. Dan keeps finding that all the chairs in the office are being stolen, and he's convinced that Ramon is the culprit. What none of them realise is that Dr Lexington has arranged for them all to be implanted with a new, experimental microchip, "Splinter", which allows their deepest thoughts to be accessed by a computer genius and displayed to the project's mysterious backers. From a secret location ...