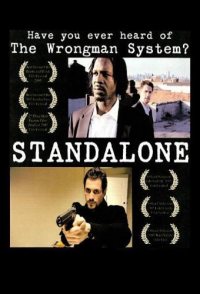 'The system is simple: Word, Rap, Fall.' Word Step 1: A Wrongman, once in the system, puts the 'word' out on the street, spreading false rumors about his (so-called) criminal activities, drawing the police's attention away from the real thing. He commits no crimes- all he does is look guilty. 'When you're a Wrongman, you're the Devil without Hell.' Rap Step 2: A Wrongman arranges his own arrest, but makes sure that the evidence is not enough to convict and imprison him. He beats the 'rap' and the police, baited and frustrated, continue their pursuit. Meanwhile, the real criminals operate with impunity. 'Cameras everywhere, people asking about my private life, big money for whoever gets dirt on me. I'm on TV, the front page too. Hell - I feel like a movie star.' Fall Step 3: A Wrongman is arrested, tried, convicted and imprisoned. He takes the 'Fall' for his client. His sentence: always the minimum. His reward: millions. 'You have to be there. You have to watch it happen. So when the ...