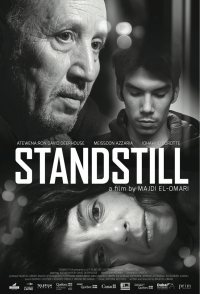 Arihote, a Kanienkehaka 'Mohawk', sometime war photographer, whose life is in a rut, witnesses a revenge killing in Montreal by Wedad, a Palestinian refugee. Suddenly, he is overwhelmed by the past as he tries to piece together the present. The characters in Standstill have seen their attempts to move forward thwarted by cultural and political forces infringing on their lives as individuals. Finding new solace in each other may be the first step to freeing themselves from their inertia.