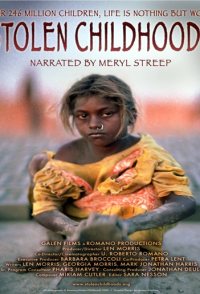 Stolen Childhoods is the first feature documentary on global child labor ever produced. The film features stories of child laborers around the world, told in their own words. Children are shown working in dumps, quarries, brick kilns. One boy has been pressed into forced labor on a fishing platform in the Sea of Sumatra, a fifteen-year-old runaway describes being forced into prostitution on the streets of Mexico City, while a nine-year-old girl picks coffee in Kenya to help her family survive. The film places these children's stories in the broader context of the worldwide struggle against child labor. Stolen Childhoods provides an understanding of the causes of child labor, what it costs the global community, how it contributes to global insecurity and what it will take to eliminate it. The film shows best practice programs that remove children from work and put them in school, so that they have a chance to develop as children and also have a chance of making a reasonable living when...