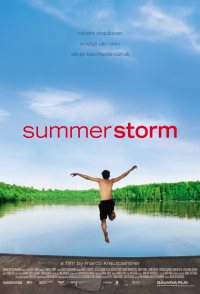 Tobi and Achim, the pride of the local crew club, have been the best of friends for years and are convinced that nothing will ever stand in the way of their friendship. They look forward to the upcoming summer camp and the crew competition. Achim's girlfriend Sandra is on the girl's team and he enjoys spending more time with her. Tobi becomes increasingly skeptical of their relationship. Anke, the pretty girl who has fallen for Tobi, doesn't make things any easier, then the gay team from Berlin arrives and Tobi is totally confused. The storm that breaks out the evening before the race begins is more than meteorological in this sensitive story about the complexities of growing up.