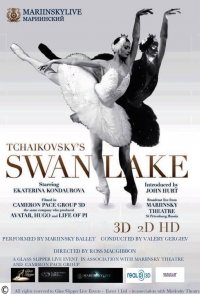 A spectacular special event edition of Swan Lake in 3-D starring Ekaterina Kondaurova and Natalia Vodianova, model, actress, and storyteller, was recorded and broadcast live from the historic Mariinsky Theatre St. Petersburg, Russia, the city where the world's most loved ballet was created. This was a 3-D live screening celebrating two hundred seventy-five years since Russian ballet started in the exquisite splendor of the Winter Palace. There will be opportunity to see the original unique version in a restored new cut for world audiences in 2016/2017. Ekaterina Kondaurova, star of Mariinsky Ballet, is Odette-Odile, a beautiful Swan Maiden who falls in love with Prince Siegfried (Timur Askerov). Odette is controlled by the wicked magician Von Rothbart and Prince Siegfried is fascinated by her charm. Romantic drama. In stunning 3-D by the makers of Avatar (2009), accompanied by Tchaikovsky's glorious score conducted by one of the world's greatest, Valery Gergiev. Also in high ...