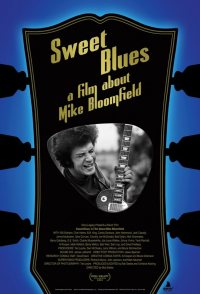 "You know, I like sweet blues... I want to be singing. I want to be sweet," said music legend Mike Bloomfield of his searing, lyrical guitar playing. His awesome instrumental prowess is on full display in this raucous documentary celebrating the legacy of a hard-living, finger-fretting renegade. Described by fellow icon Al Kooper as "not just another white boy [but] someone who truly knew what the blues were about," Bloomfield drew on African American tradition while burnishing his licks with a radical compositional approach reflecting the social and cultural upheaval of the 1960s. Bloomfield passed away in 1981, but his sterling musicality as the embodiment of Chicago blues lives on through the work of acolytes such as Carlos Santana, B.B. King and Charlie Musselwhite, all of whom testify to the master's enduring influence in Bob Sarles' lovingly crafted film. Sweet, indeed.