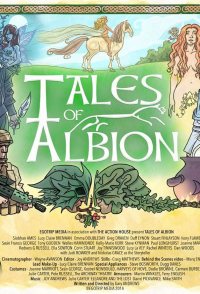 In times gone by, storytellers would sit by the fire - a flickering light in the darkness - and tell old tales. Today this light in the darkness is the TV in the corner. Tales of Albion is a movie consisting of 8 stories, revealing some of the myths & legends of ancient Britain in new and unexpected ways. It is based around the festivals on the wheel of the year and woven together by just such a storyteller. What is an ancient Irish goddess doing in Afghanistan? How did Shakespeare get the idea for his most magical play? Who is the mysterious horned figure that links King Arthur & Robin Hood? Where does the Golden Rider come from? Why would a mother cast her baby adrift in a leather bag? These questions and many more are answered in the film. Shot in HD and packed with gorgeous costumes, stunning locations, special effects and even animated sequences, this film is a hidden gem belying it's modest budget and one not to be missed.