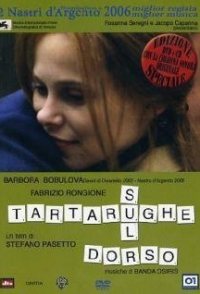 Fabrizio Rongione plays a young man who, after time in prison for causing gbh in a fight (he has an explosive temper which he tries to control), restlessly moves from job to job, mostly in Trieste, Italy. Jobs include working as a packer in a supermarket, a baker, and a crane operator. His abiding passions are photography, and catching glimpses of a girl he first gave a turtle to (as payment for touching her back) as a schoolboy. The girl, meanwhile, has become a woman (Barbora Bobulova) who, at the start of the film has cut short a medical degree to be with her ailing aunt also in Trieste - the rest of her family having died. She has nightime work as a cleaner, and catches the same 5am tram home each morning that the "baker" takes to work. The director (Stefano Pasetto) weaves a delicate tango of glimpses, and near misses as the two lives brush, separate, brush again and finally coalesce some years later through an accident on the crane. (The director uses the game of "Scrabble" to ...