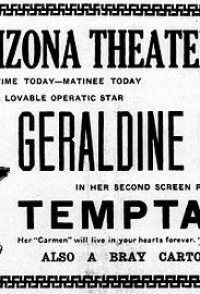 Renee Dupree who sings in a restaurant, is spotted by Otto Muller, an opera impresario. Muller, who is taken with her beauty, offers Renee the starring role in his company's next production. She happily accepts the part only to discover later that Muller intends to make her his mistress. Engaged to Julien, a poor but talented violinist and composer, Renee refuses Muller's sexual advances and is fired. When Muller finds out that Julien, who has been writing an opera for him, is Renee's fiance, he dismisses him as well. Penniless, Julien takes work in a foundry, an exhausting job that causes him to fall sick. Distressed over her lover's health, Renee agrees to meet Muller's demands in exchange for a production of Julien's opera with her as star. As contracted, Renee goes to meet Muller after the successful opening show but luckily finds him dead, the victim of a vengeful, jilted mistress.