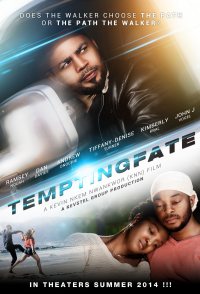 Two brothers, one of deep faith and the other buried in a life of crime have their worlds torn apart when the wrong one goes to jail and the other commits an unforgivable act. Synopsis: Tempting Fate is the story of two very different brothers. First there is Edu Okoye, a talented singer and a man of deep faith, Edu's spirituality is helping him combat cancer, that and the love of his wonderful girlfriend Tracey. Edu's older brother Ugo, is almost the polar opposite of Edu. Edu is calm, reflective and peaceful whereas Ugo is hotheaded, impulsive and at times menacing. Ugo has also chosen a very different path than Edu, a life of robbery and crime and though Ugo knows he is on a path of destruction, the life he has chosen is not an easy one to leave and according to his gang leader Scorpion, a life he won't be allowed to leave easily. Another issue is Edu's cancer is worsening and Ugo needs to stay in his life of crime to pay for surgery his brother desperately needs. A violent crime ...