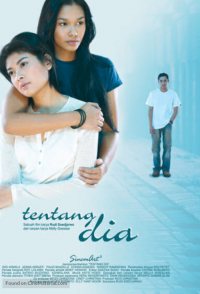 Gadis has a prolonged heartbreak after her boyfriend betrays her and impregnates her best friend. She has her diary as company and refuses to socialise. Randu is very much in love with Gadis, and he tries many ways to get her attention, but he never succeeds. One day, Gadis accidentally hits a pedestrian, who works at a food stall. Her name is Rudi. Rudi also wants to make Gadis happy again, although Rudi has a dark past. Her sister is killed by her violent father. This loss makes her run away from home. And it also makes her afraid of losing Gadis. Gadis finds out about it when she reads Rudi's diary after she dies in an accident. Randu's persistence finally pays off when Gadis is willing to accept him.