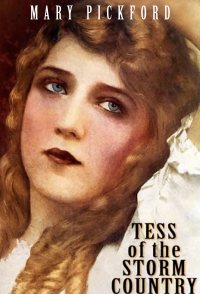 Tessibel Skinner, a wild, motherless little elf, lives with her father in a rude but on the shore of Cayuga Lake. On account of the sudden and regular squalls on the lake, the vicinity is called the "Storm Country," while the poor and ignorant fisher-folk thereabout are generally known as "squatters." Tess is one of these people, and adores her uncouth father, who lives by poaching and the illegal netting of fish. One day he is found near the body of a murdered gamekeeper, with a rifle close by, containing one empty chamber. Skinner is accused of the murder and convicted on circumstantial evidence. Tess is frantic with grief and anxiety, but Frederick Graves, a handsome theological student, and his sister, Teola, befriend Tess. Frederick tells her of God, of whom she has never heard, and His written word, the Bible, and bids her pray and have faith. Tess steals a Bible from the Mission Church, painfully spells out the lessons taught her by Frederick, and the untutored girl's faith ...