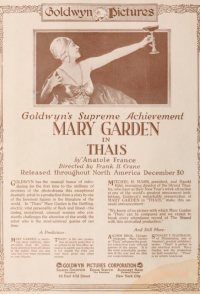 Paphnutius, a wealthy Alexandrian, is about to embrace the new faith of Christianity, but is persuaded by a friend to first see Thais, the most notable courtesan of her time. He falls in love with her, but is forced to kill a rival and conscience again urges him toward the new faith. He becomes a monk, but leaves the cloister to return to Alexandria to seek to convert Thais. In this he succeeds and she joins a nunnery. He saves her soul but loses his own peace of mind.