The Active Life of Dolly of the Dailies ratings (Movie, 1914) 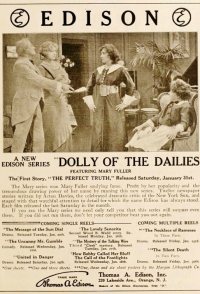 Episode 1: "The Perfect Truth" The day after Dolly Desmond had startled the community with the excellence of her graduation oration, Bobby North, a reporter on the local paper, suggested that it would be a good idea for her to write stories and things for his paper. Dolly was delighted with the idea, and started at once to put it into effect. She decided to write a story, which, although ostensibly fictional, should actually give a truthful picture of life about her as she saw it. After a week of hard work, which involved much burning of midnight oil and much weariness for the fair young authoress, the masterpiece was finished. The editor was delighted with it. It was published under the title, "The Perfect Truth: A Story of Real Life" and, at Dolly's request, the name of the author was omitted. On the afternoon of the publication of the story, the Ladies' Home Sewing Guild was engaged in its customary routine of languid needlework and somnolent gossip. One of the members began to ...