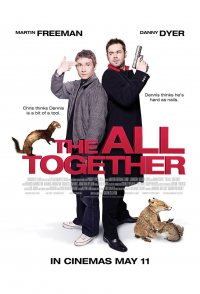 Martin Freeman plays Chris, a frustrated TV producer who is forced to leave his unreliable flatmate Bob played by Velibor Topic in charge of showing a series of real estate agents around the house he is trying to sell. Worried by Bob's habit of spending all day working in the basement playing loud music, Chris asks his friend to listen out for the door bell and show anyone who comes calling inside. Bob promises to do exactly that and for once, not to let him down. Over the course of the day, whilst Chris struggles to cope with his insane TV presenter colleague Jerry, played by Richard Harrington - back at the house it is soon clear that bonkers Bob is taking his promise to Chris rather too literally. Bob has indeed, allowed anyone inside, including a couple of gun-toting gangsters - an incompetent young Brit played by Danny Dyer and an incontinent American played by Corey Johnson. That evening, Chris is surprised to return home and find his flatmate, four estate agents, two Jehovah's ...

Night at the Museum: Battle of the Smithsonian
Total votes: 174,291
Average rating: 6.0