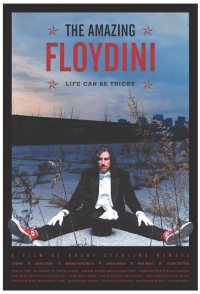 Floyd has never won Lotto. Nor has he won at OTB. He's a middle-aged flunk floundering from temp jobs to performing magic tricks in the street to earn a buck. His life consists of his therapist, his nursing home bound mother and B.S. sessions with other late bloomers. But on the day before his 40th birthday, he decides to take charge of his life and pursue his first career as a magician. He soon realizes, however, that due to his allergic reaction to rabbits and ineptitude for children, his future in birthday party magic seemed quite ephemeral. Upon meeting Lulu, another life wanderer, Floyd steps up his act for adults and decides to supplement his income by incorporating a wallet disappearing trick into the act with her as his assistant. First he picks one. Then two. Then a hundred. Lulu perfects the art of distraction while Floyd perfects his sleight of hand. Their success becomes so great, the magic career quickly wanes to pursue full time crime. Ultimately, when Floyd refuses to ...