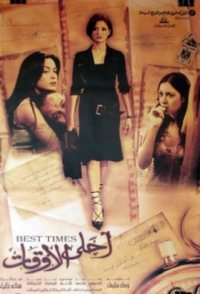 A personal tragedy brings a woman closer to a handful of trusted friends in this independent drama. Salma (Hanan Turk) is a middle-aged woman who has achieved success in her profession but is still searching for contentment in her personal life. After her mother unexpectedly dies, Salma is sent into an emotional tailspin, and while her stepfather (Samie Al-Adel) tries to help by letting her move into his home, nothing seem to make her feel better. One day, Salma receives the first in a series of anonymous gifts and letters from someone who appears to know her, though she has no idea who they might be. As Salma sorts through a handful of male admirers in hopes of uncovering the identity of her new benefactor, she is reunited with two close friends from her days at school, Yusriyah (Hend Sabri) and Doha (Menna Shalabi), who commiserate with her as they share their own difficult life events. Ahla al Awqat (aka The Best of Times) was the first feature from writer and director Hala Khalil,...