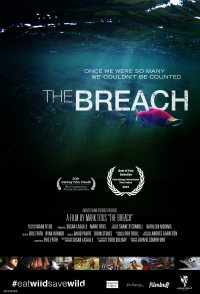 In creating The Breach I began to think of the symbiotic agreement Native Peoples had with salmon for millennia and how that has been compromised. There are hopeful restoration projects for repairing salmon runs - including the largest dam removal in US history on the Elwha River. But in thinking of what remains, my mind turned to Bristol Bay Alaska - where I'd spent those college summers 20 years before. Bristol Bay still has a perfect, healthy fishery, where 30-60 million wild salmon return each summer. They feed the land, animals and people of Bristol Bay, as they have for time immemorial. And they feed the world. Half the world's sockeye salmon supply comes from Bristol Bay. In the middle of all this, a Canadian mining company is attempting to construct North America's largest open-pit copper mine in the heart of Bristol Bay. I sought out tribal leaders, scientists, policy makers, fishermen, artists, authors and chefs - all with a shared knowledge and passion for wild salmon as ...