The Builder of Bridges ratings (Movie, 1915) 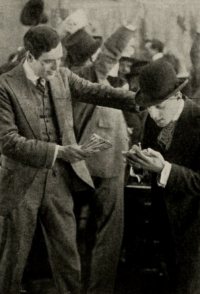 Edward Thursfield, chief engineer of the bridge building firm of Henry Killick and Company, is building the largest concrete bridge in the world. Employed in the New York office is a young man named Arnold Faringay. Arnold sees an opportunity of using money from the payroll for a big deal. He takes the money, but the market goes against him. He seeks to borrow the $20,000 from Walter Gresham, his sister Dorothy's fiancé. Dorothy learns from Arnold that Thursfield is the big power in the firm and decides to follow him to Atlantic City where he has gone to look over the site for a new pier. She meets Thursfield at Atlantic City, and playing upon his sympathy leads him to propose to her. The confidential clerk of Henry Killick, has become suspicious of Arnolds accounts, and when Thursfield arrives he finds the errors, and Arnold is forced to confess before Thursfield. Thursfield is stunned at the thought of his fiancée's brother being a thief and to save her the disgrace he pays over the...