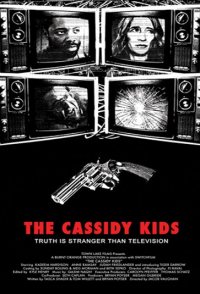 Murder, memory and Saturday morning television collide in THE CASSIDY KIDS. 25 years ago five suburban kids stumbled on a murder in their sleepy hometown and led police to the killer. Two years later The Cassidy Kids Mysteries, a Saturday morning TV show based on their story, made its premiere. A terrifying real-life story became a brightly-lit colorful world of adventure. A bloodless kidnapping replaced the murder. The kids personalities were reduced to ridiculous stereotypes. And the show was a huge hit. It ran for four years and spawned lunch boxes, a line of childrens underwear and a set of action figures still in demand today. Now, in preparation for the shows DVD release, a documentary team has invited all five of the real Cassidy Kids back home to talk about how it all began. Lewis Gaylord now owns a direct mail business. Norman Peabody struggles to make it in Hollywood as an actor. Max Cassidy, the vicious bully credited for solving the crime, still trades on his pseudo-fame ...