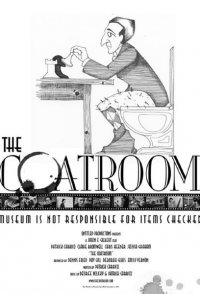 James Cotton hates his life, job, and girlfriend. In a vain attempt to sober up and make a numb life for himself, he takes a job in the Philadelphia Museum of Art. His first day on the job he's placed in the coat room with Claire whose sarcastic and hardened personality manages to pierce James's lifeless veneer. James's budding crush on the young woman is enough to rope him into a series of scams she has planned for the day in order to make enough money to move away. Under an onslaught of odd museum patrons and caricatures of the young and hip art crowd, James is powerless to ease the awful pain of existence in a rhetorical world. Claire's life of impulsive action without thought forces James to confront both her lies and his own. Does James have what it takes to change his life? Can he find a reason to exist in this overwhelmingly futile world?