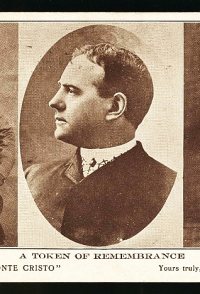 Edmond Dantes, a young sailor in the service of the Pharaoh, prior to a long voyage, takes leave of his invalid father and his sweetheart, Mercedes. The tender farewell with Mercedes arouses the jealous hatred of Fernand, a Catalan fisherman, secretly in love with Mercedes. Dantes gives Mercedes a brooch (which later again figures in the story) and sails away. In mid-sea the captain of the Pharaoh suddenly dies and entrusts Dantes with a private letter from General Murat to the exiled emperor, Napoleon Bonaparte, at Elba. Danglars, the supercargo, overhears the captain's dying request, and keeps the knowledge in the event of future need. When the vessel reaches Elba, Dantes delivers the letter to the deposed emperor, and promises to deliver Napoleon's reply to Noirtier, of the Bonaparte Committee. In Dantes' absence Fernand urges his hopeless suit of Mercedes. On the return of the Pharaoh, Morell, its owner, makes Dantes captain of the vessel, a post which Danglars had hoped to secure...