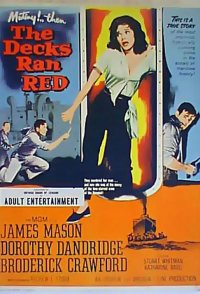 During the 1950s, the American cargo ship SS Berwind, an old WW2-era Liberty Ship, is stuck in New Zealand without a captain. The captain died of an apparent heart attack but some crew members suspect foul-play. The captain's body is taken away by the Coroner for an autopsy. Uneasy about their presence on the ship, the ship's steward and cook run away while in port, forcing the ship to hire a local Maori cook and his wife as steward. The parent company of the SS Berwind also hires a new captain for it. The new captain, Edwin Rummill, is the First Officer on a luxury cruise-liner but agrees to fly to New Zealand to take charge of the Berwind. Once aboard the Berwind, Edwin Rummill is greeted by an undisciplined crew, demoralized officers and an untidy vessel. Being already three days late, the ship sails immediately. Unknown to Rummill, to his officers and to most of the men, crew members Henry Scott and Leroy Martin are hardened criminals with an evil plan. They are planning to incite...