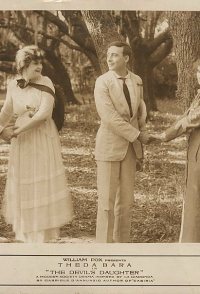 When her lover deserts her, Gioconda Dianti seeks revenge by wrecking the lives of other men. When Lucio Settala, a famous sculptor, meets Gioconda and asks her to pose for him, she sets out to ruin him. She captivates the artist with her charms, he soon forgets his wife Silvia, their daughter Little Beata and even his work. After Gioconda defies Silvia to take her husband back, Lucio, in a fit of desperation, shoots himself. Although Silvia nurses him back to health, Lucio soon returns to the enticing Gioconda. When Silvia's subsequent quarrel with Gioconda becomes a fight, Gioconda attempts to destroy Lucio's statue, but it falls on Silvia and is saved. Silvia, however, is crippled for life. Because of this, Lucio's sanity is affected and he becomes a raving maniac. Later, Gioconda, cast aside by her "man of the world," also descends into madness.