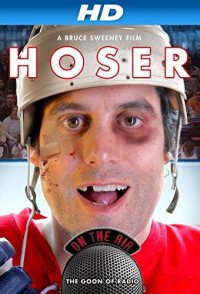 The Dick Knost Show is a comedic, character based story that satirizes sportstalk culture. Dick, 43, prickly, acerbic sportstalk host battles hard to hold his job. His chair. His mic. His life. Problem is, Dick's pathologically impulsive. He sends inappropriate tweets, inappropriate comments, and chronically does the wrong thing at the wrong time. This leads to enemies, CLAIRE, network executive, or SIMON, a rival host, who want to get Dick out of his chair. Permanently. Fortunately KELLY, 56, the show's producer, has Dick's back. But now Dick's in crisis, he faces his biggest challenge yet. Dick, an advocate of tough hockey, and dismissive of the dangers of concussions, ironically suffers a severe concussion playing squash. He can't remember a thing. Dick has to fight to get his show back. He has to battle to overcome his physical disability in order to win back his chair, his mic. His life.